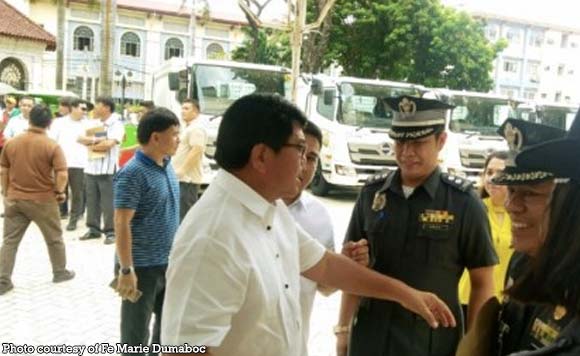 CEBU CITY — Mayor Edgard Labella on Tuesday said garbage collection here is expected to improve after 21 trucks were added to its existing fleet of 11 vehicles used for the city’s daily garbage of around 200 tons.

“This will collect the garbage in urban centers. And of course, we will be very strict in the implementation of Republic Act 9003 (Ecological Solid Waste Management Act) especially when we acquired the garbage bins,” Labella said in a press conference after the turnover ceremony in front of the Cebu City Hall.

The latest acquisition came after the supplier, Hino Motors, won the bidding last year during the term of then-mayor Tomas Osmeña, he said.

With the newly-acquired garbage trucks, Labella is contemplating to stop by next year outsourcing garbage collection service of a private firm, Jomara Konstruct Corp.

Labella tasked the city administrator, lawyer Floro Casas to hasten the purchase of hundreds of garbage bins that will be distributed to the villages in the city.

The record showed the budget of PHP20 million for the acquisition of garbage bins has been included in the 2020 budget.

“Unfortunately, the problem is some of the undisciplined residents. Once the garbage collectors have already collected (the trash), they will just throw their garbage on areas where collectors would pick (them) up. So we really have to put up garbage bins so that again there would be no (more) excuses,” Labella said.

The mayor instructed the head of Cebu Environmental Enforcement Team (CESET) to strictly implement environmental laws and to run against those who will indiscriminately throw their garbage.