Cebu campaign off to a furious start 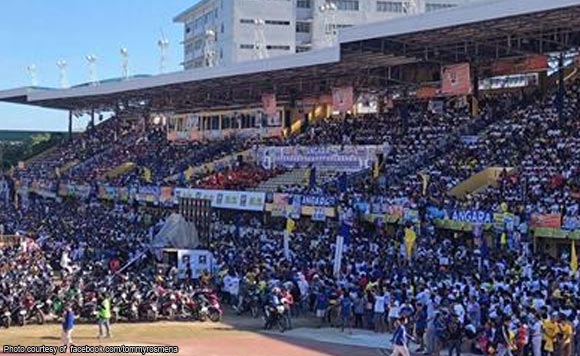 CEBU CITY — Local candidates in Cebu on Friday marked the local campaign kickoff with hand-shaking and holy mass as the two most traditional ways of starting the 40-day campaign period.

In Cebu City, incumbent Mayor Tomas Osmeña’s camp, Bando Osmeña Pundok Kauswagan (BOPK), started the campaign with a holy mass at the National Shrine of the Our Lady of Guadalupe, inviting his supporters to join his campaign rally at the Cebu City Sports Center.

Vice Mayor Edgar Labella, who challenged Osmeña for mayor, begun his group’s campaign with shaking the hands of his constituents early morning at Barangay Ermita “to honor the death of the late barangay captain Felicisimo Rupinta.”

Rupinta was killed in a November 2017 ambush in Liloan, Cebu allegedly because of politics.

In the provincial arena, two women bigwigs in Cebu politics – 3rd District Rep. Gwendolyn Garcia and Vice Governor Agnes Magpale – who are contending for governor, endured the heat of the sun in meeting their supporters across the province.

“In the past, we always started kicked-off our campaign caravan in the second district and always started in Dumanjug. This time, we started in Argao and saved Dumanjug for last,” Garcia said in her Facebook post. Her group hopped on the town of Ronda before going to Dumanjug.

In Talisay city, 1st District Rep. Gerard Anthony Gullas led his camp in a rally at the Talisay Sports Complex. He is running for mayor in lieu of his grandfather, Mayor Eduardo Gullas, who swapped him for the congressional seat, with the latter’s vow to seal his political career as a lawmaker.

Eduardo, a former Cebu governor and long-time 1st District lawmaker, is the leader of a local party, Alayon.

In Lapu-Lapu City, the Team Deretso, headed by incumbent Mayor Paz Radaz, kicked off a rally at Purok Mangga in Barangay Canjulao, to drum up the mayoral candidacy of her husband, Arturo “Boy” Radaza.

She hopes to fill-up the city’s lone congressional slot currently held by their daughter, Aileen. The couple are running under the Lakas-National Union of Christian-Muslim Democrats (Lakas-NUCD).

Challenging the Radazas is their former ally, Barangay Pajo chairman Junard “Ahong” Chan, who is running for mayor under the PDP-Laban.

Jerome Brillantes, Commission on Election-Cebu supervisor, said the start of the local campaign was “very peaceful.”

“There’s no untoward incident related to the start of the campaign for local candidates,” Brillantes told the Philippine News Agency (PNA) in an interview.

“So far so good, I hope magpadayon (it will endure),” Brillantes said.

However, Sinas said the police has started monitoring political activities in the four provinces of the region.

The police will secure campaign rallies starting on Friday’s opening salvo, until the last day on May 11. (PNA)