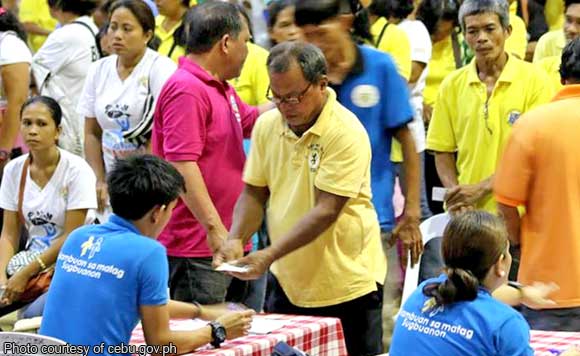 0 406
Share
Want more POLITIKO News? Get the latest newsfeed here. We publish dozens and dozens of politics-only news stories every hour. Click here to get to know more about your politiko - from trivial to crucial. it's our commitment to tell their stories. We follow your favorite POLITIKO like they are rockstars. If you are the politiko, always remember, your side is always our story. Read more. Find out more. Get the latest news here before it spreads on social media. Follow and bookmark this link. https://goo.gl/SvY8Kr

Some 2,400 barangay workers in three Cebu towns received some P4.3 million in cash incentives from the provincial government earlier this month.

The provincial government said the beneficiaries, who got their incentives March 13 and 14, are from Dalaguete, Argao and Cordova towns.

Second Provincial District Board Member Jose Mari Salvador represented the provincial government in the southern leg of the distributions.

According to the provincial government, the cash incentives ranged from P1,500 to P2,400 (http://www.cebu.gov.ph/news/p4-3m-distributed-brgy-workers-dalaguete-argao-cordova-towns/).

Earlier, Governor Hilario Davide III said they are making sure there are enough cash incentives for barangay health workers.