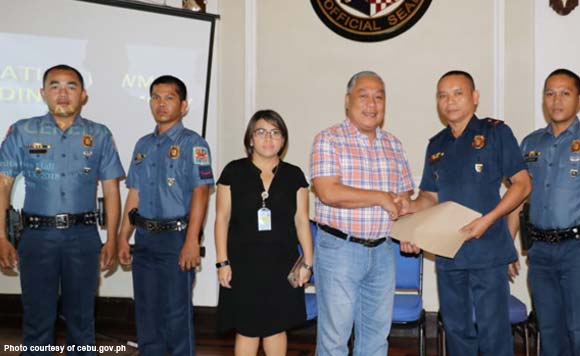 Some 279 operatives of the Cebu Provincial Police Office received P2.59 million in cash rewards from the provincial government for their achievements against the drug trade.

The rewards were given during an awarding ceremony organized by the Cebu Provincial Anti-Drug Abuse Office (CPADAO) last Dec. 13.

“Every day, you risk your lives in service to your communities,” Gov. Hilario Davide III told the police operatives as he thanked them for their dedication.

CPADAO head Carmen Remedios Durano joined Davide in distributing the cash reward to the operatives under the “Operation Lawmen, Rewards and Incentives” program.

Receiving the rewards were operatives from 17 CPPO stations and the Philippine Drug Enforcement Agency for buy-busts from January 2017 to October 2018.

The Provincial Intelligence Branch got P461,000 cash, shared by 31 operatives, while Consolacion Police Station got P445,386 for 28 personnel.

One of the awardees was PO2 Dennis Valiente, who was shot and wounded in one of the operations after serving as decoy even when he was off duty.