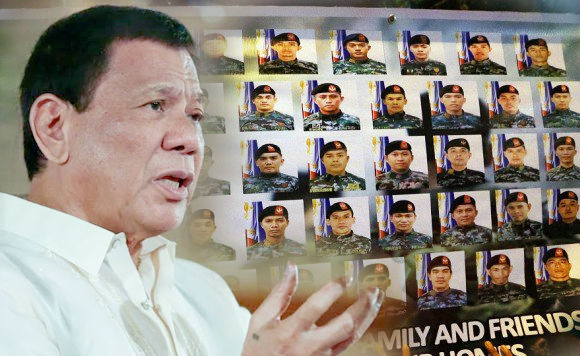 For approving the posthumous conferment of the PNP Medal of Valor for the 42 Special Action Force (SAF) troopers who died neutralizing Malaysian terrorist and bomb-maker Zulkipli Bin Hir alias “Marwan” in Mamasapano, Maguindanao some two years, Sen. Alan Peter Cayetano has expressed his appreciation and gratitude to President Rodrigo Duterte.

“I thank President Rodrigo Duterte for approving the posthumous conferment of the Medal of Valor for all SAF troopers who bravely fought and died in the line of duty in Mamasapano two years ago,” the politiko said in a statement February 10.

Cayetano said the Medal of Valor is the highest award that can be awarded by the PNP to its members who performed acts of personal bravery and self-sacrifice, above and beyond the call of duty.

“Under the previous administration, only two of our martyred SAF 44 troopers were given this honor, while the remaining 42 were given this Distinguished Conduct Medal. And so this award should put on record that all 44 SAF troopers were heroes who made the highest act of self-sacrifice for our nation and our people,” the senator said.

“On the other hand, I still believe that the highest honor that our government can give our heroes is justice for them and for their families. President Duterte and I have made a pledge to Camille Pabalinas, the six-year-old daughter of the late Senior Inspector Ryan Pabalinas and his widow, Erika, that we will do anything possible to seek justice for his dad. We will ensure that justice is served for you, Camille, to your dad, and to the rest of the SAF 44 and their families,” Cayetano stressed.