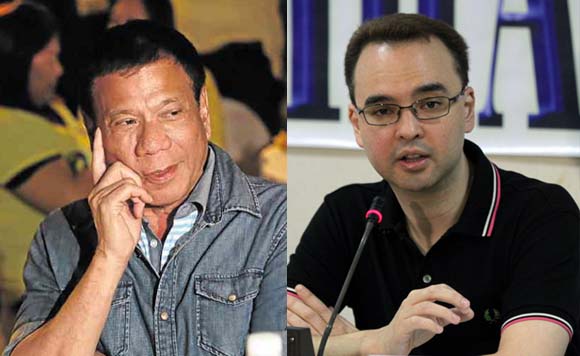 0 389
Share
Want more POLITIKO News? Get the latest newsfeed here. We publish dozens and dozens of politics-only news stories every hour. Click here to get to know more about your politiko - from trivial to crucial. it's our commitment to tell their stories. We follow your favorite POLITIKO like they are rockstars. If you are the politiko, always remember, your side is always our story. Read more. Find out more. Get the latest news here before it spreads on social media. Follow and bookmark this link. https://goo.gl/SvY8Kr

Davao City mayor Rodrigo Duterte believes it would be “a big waste” if Sen. Alan Peter Cayetano is not given a seat in the Cabinet in the next administration.

Duterte met with Cayetano on October 23 when the senator arrived in the city to guest in the mayor’s TV program.

“This man (Cayetano) is full of ideas and he can be of good use to government if he would be given a seat in the Cabinet of the next administration,” Duterte said of Cayetano in a Philippine Star report.

He added it would be a big waste of talent if the next President will not appoint Cayetano in the Cabinet.

According to Duterte, he and Cayetano have the “same line of thought” in pursuing federalism or decentralization in the government.
Cayetano, who is running for vice president, is courting Duterte to run for president and partner with him in the 2016 elections.

But the Davao mayor has declared he would not seek the presidency; he is running for re-election instead.