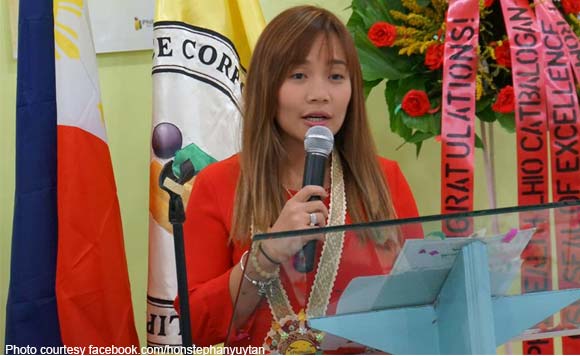 0 709
Share
Want more POLITIKO News? Get the latest newsfeed here. We publish dozens and dozens of politics-only news stories every hour. Click here to get to know more about your politiko - from trivial to crucial. it's our commitment to tell their stories. We follow your favorite POLITIKO like they are rockstars. If you are the politiko, always remember, your side is always our story. Read more. Find out more. Get the latest news here before it spreads on social media. Follow and bookmark this link. https://goo.gl/SvY8Kr

Mayor Stephany Uy-Tan said on Friday she would step down once she received the six-month suspension order over the purchase of private land and leasing of the city public market.

In a press briefing Friday, Uy-Tan said she has not received any suspension order from the Office of the Ombudsman yet and that she still has to continue functioning as the city’s chief executive.

“Rest assured that I will not make any scenario by urging people to stop the officials who will serve the suspension order from the Ombudsman. But I cannot prevent people from coming to the city hall to show their support for me,” Uy-Tan said.

The mayor said that once the suspension order is served, she will gladly accept it for the investigation to proceed.

“If the suspension is already there, I will not escape. I will accept it and respond in the proper forum on their allegation because I know that what they accuse me of is not true,” she added.

When asked what would happen to the city government’s projects that are up for implementation, Uy-Tan said these would proceed, especially those awarded to contractors.

Last Nov. 26, Ombudsman Samuel Martires approved the preventive suspension on Uy-Tan, along with some city council officials and other city employees, for six months over charges of abuse of authority, grave misconduct, and gross neglect for the purchase of land from private individuals.

The land purchase case stemmed from the complaint of city council legislative staff officer Bernard Jake Ramos, who alleged that the respondents purchased an eight-hectare agricultural land owned by Alvin Cesar Laohoo and Lorenzo Laohoo Jr. in the amount of P120.225 million, which is much higher than its market value of P155,497.84 in 2016.

Uy-Tan denied that there is overpricing based on actual assessment. In fact, the city earned from the deal for purchasing the lot for only P1,500 per square meter, lower than the P3,500 to P8,000 price offerings of nearby properties.

“This is all politically motivated. I remember that in 2016, our opponents declared that they would file many cases against me,” the mayor said.

The controversy prompted the mayor’s family to field Dexter Uy as a substitute candidate for Stephany. Dexter, a law student, is the city’s former Sanguniang Kabataan (youth council) federation president.

“What happened on the last day of substitution is that we made sure that we will save and protect Catbalogan. It’s more of the desire that the people of Catbalogan will continue to receive the best service the government has to offer. It has nothing to do with the reported suspension issued to all local officials of Catbalogan,” she explained.

Catbalogan City, the capital of Samar province, has been ruled by the Uy clan during the past 14 years. The mayor’s father, Coefredo, was the city mayor for nine years until 2013. (PNA)