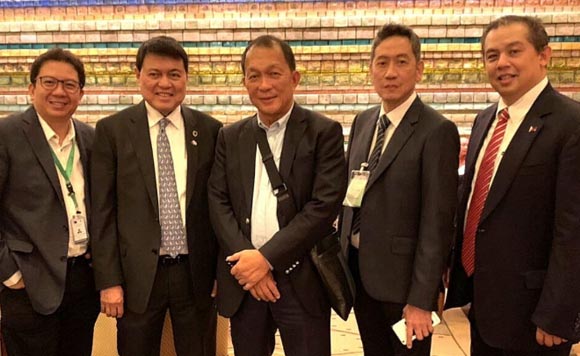 Insiders within the Villar and Romualdez camps disclosed to Politiko that the two had a closed-door meeting at the Imperial Hotel in Tokyo, Japan where President Rodrigo Duterte attended the 25th Nikkei Conference on the Future of Asia.

Both camps though have refused to release details about the private talks between the leaders of the two prominent political parties in the country. Villar is the chairman of Nacionalista while Romualdez currently heads the once powerful Lakas-CMD.

Both Villar and Romualdez were part of the more than 200-man official delegation of the chief executive during his business trip in Japan.

Romualdez and Villar’s party mate, Taguig-Pateros Representative-elect Alan Peter Cayetano are both seeking the Speakership of the House of Representative this coming July.

Villar and his wife, reelected Sen. Cynthia Villar last month hosted a thanksgiving dinner for winning Nacionalista officials inside the Laurel Mansion in Mandaluyong City. The country’s oldest existing political entity however has yet to reach a consensus on who to support in the upcoming Speakership race.

A party-list solon who refused to be identified revealed that a significant number of the 43-man NP contingent in the Lower House this coming 18th are expected to side with Romualdez if the party leadership failed to reach a consensus on their chosen bet for the House Leadership.

The party-list lawmaker who currently holds a key position within the House Leadership stressed that these Nacionalista members are supposedly backing Romualdez due to their close attachment with former Senator Ferdinand “Bongbong” Marcos Jr., also party member himself. Marcos is a first cousin of Romualdez.

Cayetano’s Speakership bid might face an uphill battle if he can’t muster support from his own party mates unless the Villar couple will instruct its members to rally behind the former Foreign Affairs secretary.