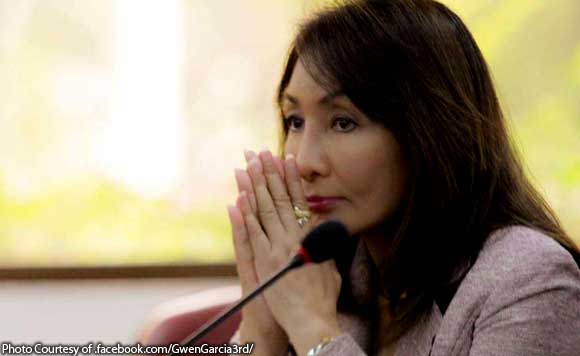 Cebu 3rd District Representative Gwendolyn Garcia has asked the Sandiganbayan 2nd Division to allow her to visit China and Japan.

In a motion filed by her lawyers, the legislator said she plans to be in Japan and China from November 23 to December 2.

With this, she assured she has no plans to evade the graft and malversation charges she is facing before the court.

“Being an incumbent Representative of the Third Legislative District of Cebu and the current Deputy Speaker of the House of Representatives, she will, and she undertakes to return to the Philippines, to continue serving her constituents, and to complete her term, which will expire on June 30, 2019,” she cited.

Garcia said she and members of the House Committee on Population and Family Relations will be in Japan from November 23 to 26 to conduct a public hearing and consultation with overseas Filipino workers on the proposed bill on the dissolution of marriage.

Under the charges against her, Garcia is accused in her alleged involvement in the anomalous purchase of a 24.92-hectare property in 2008, when she was still provincial governor, for Cebu’s human settlement and seaport project.

A large portion of the property was found submerged in water and cannot be used for the project.