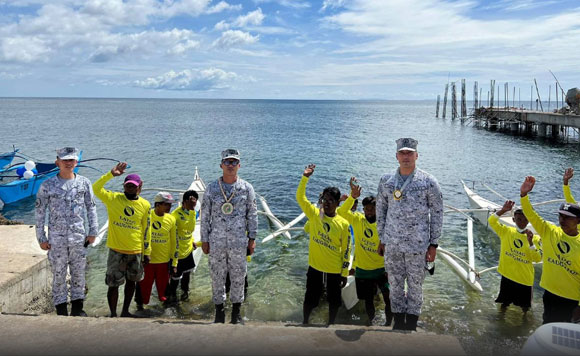 The Naval Reserve Center Eastern Visayas, in partnership with the Bangko Sentral ng Pilipinas, turned over 10 fishing boats to survivors of Typhoon Odette at Olango Island in Lapu-lapu City, Cebu.

“These fishing boats represent a new hope for the survivors of Typhoon Odette which struck Cebu in December last year. The fishing boats of the beneficiaries were either destroyed or heavily damaged by the storm,” NRCen-EV Commander James Francis Lugtu said.

“These boats will hopefully provide gainful employment to our beneficiaries, as well help their families and community in general resume their way of living,” he added.

Commodore Florante Gagua, commander of Naval Forces Central, said the project was timely and relevant in helping the community recover from the devastation brought about by Typhoon Odette.

The Bangka Project, with the theme “Layag para sa Kaugmaon” (Sailing for the Future), aims to restore the livelihood of the members of the Happy Fisher Folks in the island.