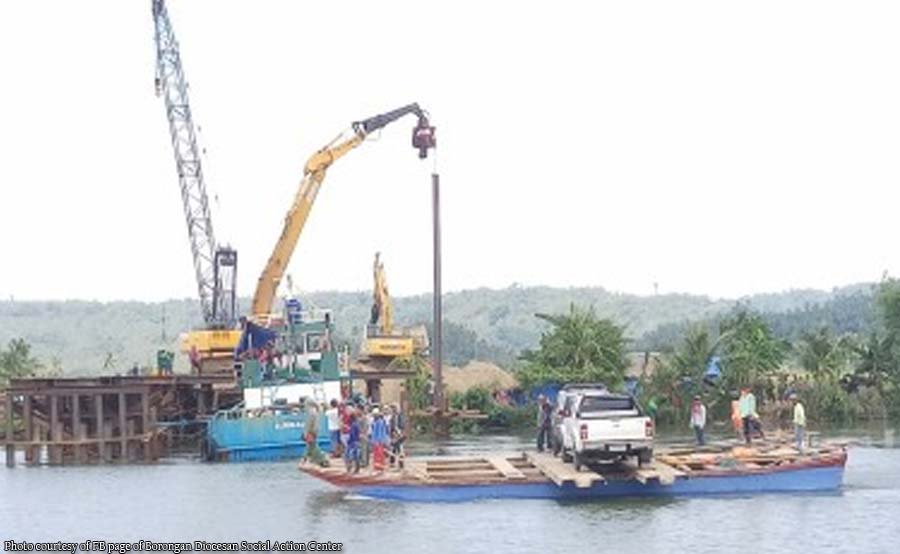 0 443
Share
Want more POLITIKO News? Get the latest newsfeed here. We publish dozens and dozens of politics-only news stories every hour. Click here to get to know more about your politiko - from trivial to crucial. it's our commitment to tell their stories. We follow your favorite POLITIKO like they are rockstars. If you are the politiko, always remember, your side is always our story. Read more. Find out more. Get the latest news here before it spreads on social media. Follow and bookmark this link. https://goo.gl/SvY8Kr

Varquez led the team in the inspection of Simora Bridge construction in Northern Samar, a major component of the coastal road project that will connect the island town of Laoang to the mainland in Palapag town.

The Catholic bishop also toured the towns of Laoang and Palapag to check the status of the ongoing road project that links the four Pacific coastal towns of Northern Samar to Laoang.

“The road network and bridges are important infrastructures to aid the development of these towns. Its absence may result in peace and order and economic setbacks,” Varquez said in a phone interview after the first field monitoring activity.

The monitoring was almost postponed due to the recent clash between government troops and rebels, where a soldier of the 63rd Infantry Battalion and two communist rebels died.

The soldiers were deployed in the area to secure the infrastructure project when a group of communist terrorists attacked them early morning on May 21.

“It is sad to hear that there are people who sacrificed their lives in the implementation of a project designed to bring development and progress,” Varquez said.

“I am appealing to the people that if you can talk with our rebel brothers, tell them to stop and spare this project in their attacks because this will not only benefit a few sectors but our entire province,” he said.

The church official, who heads SIPPAD, said that solving the peace and order concerns is not only the job of the military but the community as well. “We need to work hand-in-hand to solve our security problem and to maintain peace and order.”

SIPPAD is a partnership of the church, academe, civil society, media, and youth sectors in Northern, Eastern, and Samar provinces. The organization is headed by the three bishops in the Diocese of Borongan, Calbayog, and Catarman, who oversee the church in Samar Island provinces.

The partnership has identified the PHP997.50-million road project as a priority for monitoring since it is crucial in solving decades-long poverty and insurgency.

The project, funded through a loan from the South Korean government, will open an 11.6-km. two-lane road and build three bridges. The Korean contractor aims to complete the project by March 2020.

To reach the capital town of Catarman, residents of Palapag and three other Pacific towns — Mapanas, Gamay, and Lapinig — need to cross the river twice through a pump boat ride.

The road project will also help promote the tourism potentials of the four Pacific coastal towns blessed with beaches, rock formations, waterfalls, and caves, he said.

Through this road network, Eastern Samar will be directly connected to Northern Samar without passing through the cities of Catbalogan and Calbayog in Samar province, cutting travel time by six hours via Arteche-Palapag Road bordering the eastern and northern side of the province. (PNA)