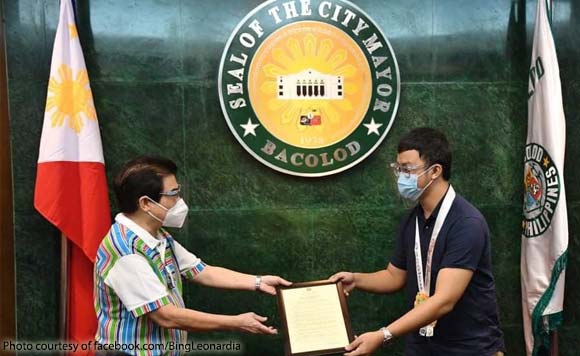 In his Executive Order (EO) No. 76, Mayor Evelio Leonardia congratulated and commended Mabugat, who grabbed the No. 2 spot with a rate of 88.58 percent.

“Patrick Joseph Mabugat is a source of pride for the city of Bacolod and serves both as an inspiration and role model for its youth,” a portion of the EO read. (https://bit.ly/33EPwO9)

Mabugat, a resident of Barangay Alijis, graduated from the University of Saint La Salle. He took his undergraduate studies at the University of Negros Occidental-Recoletos and topped the September 2014 Medical Technology Board Examination with a rating of 90.90 percent.

“Mabugat has now joined the honorable ranks of prominent and distinguished physician board topnotchers, each being a shining beacon in the practice of medicine,” said Leonardia.

The city mayor presented the framed copy of the EO to Mabugat during the latter’s courtesy call at the Bacolod City Government Center on December 1.