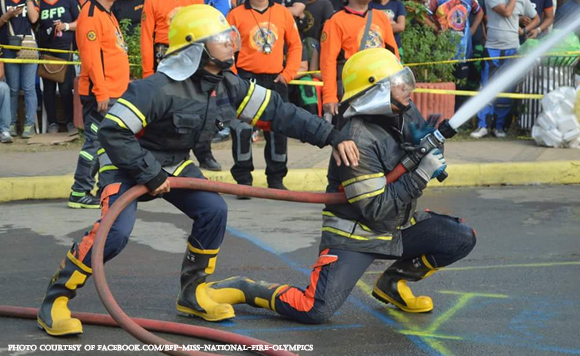 0 5,351
Share
Want more POLITIKO News? Get the latest newsfeed here. We publish dozens and dozens of politics-only news stories every hour. Click here to get to know more about your politiko - from trivial to crucial. it's our commitment to tell their stories. We follow your favorite POLITIKO like they are rockstars. If you are the politiko, always remember, your side is always our story. Read more. Find out more. Get the latest news here before it spreads on social media. Follow and bookmark this link. https://goo.gl/SvY8Kr

Fire Prevention Month may be over, but this did not stop the Bureau of Fire Protection in Eastern Visayas from holding a Fire Olympics to hone firefighters’ skills.

“This Fire Olympics is one way of enhancing or reorienting the skills that had already been taught since the barangay participating teams were already trained on basic firefighting skills years back,” said Raul Inocando, Fire Officer III and BFP Information Officer-designate.

Competitions included the bucket relay where a container from a two-meter distance will be filled with water; actual firefighting using a fire hose; and emergency medical rescue.

“This activity gave each participant a chance to become a true firefighter, who brought talents, dedication and commitment for the job they are tasked to do as a volunteer firefighters,” Maasin City Fire Marshal Lino Asumbrado said.