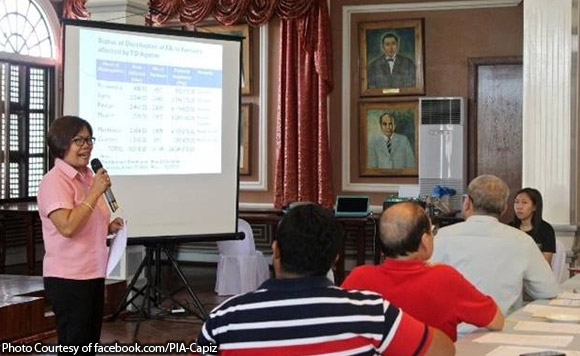 0 1,214
Share
Want more POLITIKO News? Get the latest newsfeed here. We publish dozens and dozens of politics-only news stories every hour. Click here to get to know more about your politiko - from trivial to crucial. it's our commitment to tell their stories. We follow your favorite POLITIKO like they are rockstars. If you are the politiko, always remember, your side is always our story. Read more. Find out more. Get the latest news here before it spreads on social media. Follow and bookmark this link. https://goo.gl/SvY8Kr

After a delay, farmers in Capiz province will soon get some P12.736 million in financial assistance from the Office of the Provincial Agriculturist.

Provincial agriculturist office head Sylvia dela Cruz said the delay in the distribution of the assistance was mainly due to Tropical Depression Agaton.

She said the P12,736,800 will be distributed to the farmers whose towns were placed under a state of calamity.

Other factors for the delay included :

Dela Cruz said some P13,076,100 had already been distributed to the farmers earlier, with each farmer beneficiary getting P2,175.

Also, she said financial assistance for the affected farmers of Pontevedra, Sigma and Panitan towns were already released.

The assistance for farmers in Maayon had been partially released and the fund to aid the affected farmers for Cuartero and Mambusao towns is ready, she said.

Earlier this year, the Provincial Disaster Risk Reduction and Management Council realigned P26 million from the province’s calamity fund for the post-disaster rehabilitation and recovery assistance to farmers heavily affected by flooding due to “Agaton.”