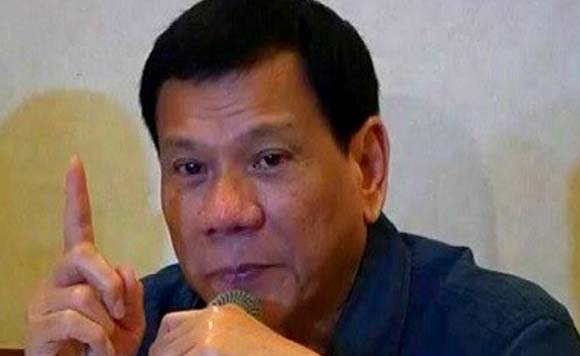 0 371
Share
Want more POLITIKO News? Get the latest newsfeed here. We publish dozens and dozens of politics-only news stories every hour. Click here to get to know more about your politiko - from trivial to crucial. it's our commitment to tell their stories. We follow your favorite POLITIKO like they are rockstars. If you are the politiko, always remember, your side is always our story. Read more. Find out more. Get the latest news here before it spreads on social media. Follow and bookmark this link. https://goo.gl/SvY8Kr

Davao City Mayor Rodrigo Duterte appears to have practically gotten away with cussing Pope Francis after Catholic Church officials in his hometown let him off the hook with only a lecture on Christian values.

In a Facebook post, Duterte aired his resolve to minimize swearing after a meeting with prominent prelates in Davao City.

“I visited and talked to Archbishop Romulo Valles, and Bishop George Rimando, together with Monsignor Paul Cuison and my executive assistant Bong Go. I was admonished and lectured on Christian values, and in return I told them that I would lessen my use of cuss words,” Duterte said.

“I am even regulating myself and will donate P1,000 to Caritas Davao everytime I would swear,” he added.

Perhaps to make up for badmouthing the top leader of the Roman Catholic Church, Duterte said he also plans to visit Vatican City “soon.”

He said he is thankful to his friends in the Catholic Church for arranging the meeting, which he described as “good.”

Duterte had earned criticism for recalling that he cussed Pope Francis for causing traffic during his visit to Manila last January. He has since apologized.