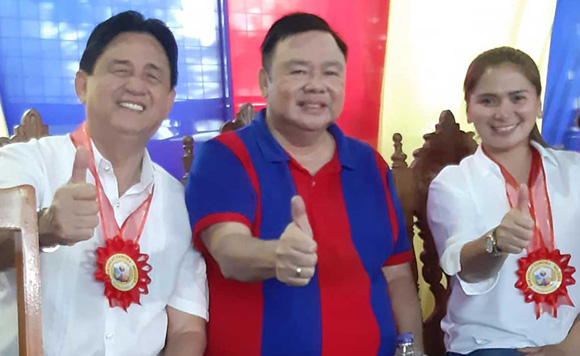 0 20
Share
Want more POLITIKO News? Get the latest newsfeed here. We publish dozens and dozens of politics-only news stories every hour. Click here to get to know more about your politiko - from trivial to crucial. it's our commitment to tell their stories. We follow your favorite POLITIKO like they are rockstars. If you are the politiko, always remember, your side is always our story. Read more. Find out more. Get the latest news here before it spreads on social media. Follow and bookmark this link. https://goo.gl/SvY8Kr

The lineup of Team Uswag under Iloilo City Mayor Jerry Treñas will continue to dominate the city’s political landscape in the wake of the 2022 elections.

Partial and unofficial results transmitted by 498 of the 505 clustered precincts in the city as of 5:47 a. m. Tuesday indicated that Treñas is leading with (NUP)184,953 votes over challengers Jun Capulot Jr., who garnered (PRP) 53,910 votes, and Vicente Ang with 774 votes.

Incumbent Vice Mayor Jeffrey Ganzon also leads the race with 162,140 over Kayser Jadulos who only got 41,172 votes. (https://bit.ly/38eSxKE)

For the city’s lone district congressional seat, incumbent Rep. Julienne Baronda is bound for a fresh mandate with 145,555 votes over former city mayor Jose Espinosa III who had 83,143; Juni Espinosa, 1,647; and Rudy Bantolo, 1,430.

“I am humbled by the fresh mandate that the Ilonggos have given me, and their trust will only motivate me to double my efforts to repay them with viable and life-changing projects, and transformational programs,” Baronda said in a statement.