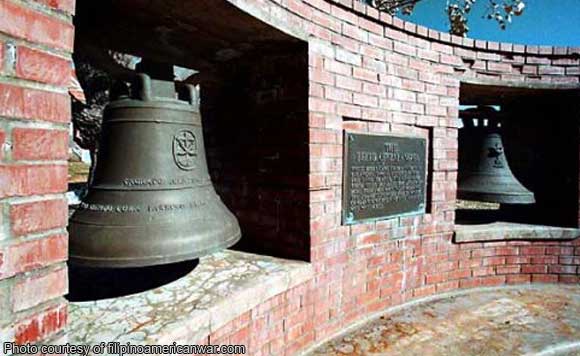 Lorenzana said the aircraft that will bring the war artifact will arrive at the Villamor Airbase in Pasay City before noon.

“I will go around with Ambassador Sung Kim, we will look at the bells, then I will sign documents that I am accepting the bells from them,” the defense chief said.

While President Duterte will be present, he will not deliver a speech during the ceremony.

“There will be three speeches, one from Secretary James Mattis to be read by his representative, then Ambassador Kim, and me,” Lorenzana told reporters at the sidelines of the Pilipinas Conference organized by the Stratbase Albert del Rosario Institute in Makati City.

Lorenzana said the bells’ return to its homeland will serve as a closure to the dark episode in US-Philippine relations.

He said the first request to bring back the bells was made in 1935 by Eugenio S. Daza, the plotter and leader of the Battle of Balangiga.

In 1994, then president Fidel V. Ramos also made a pitch to get the war booty back.

“I was in Washington DC back then. We have been working for the return, but nothing happened because there was no US government involvement then,” Lorenzana said.

Asked if the President would visit Washington following the bells’ return, Lorenzana said Philippine Ambassador to the United States Jose Manuel Romualdez is currently in talks with the Chief Executive.

“Ambassador Romualdez is here trying to talk to the President to go there next year,” he said.

“The plan is there but he will still being convinced by Ambassador Romualdez,” he added. (PNA)