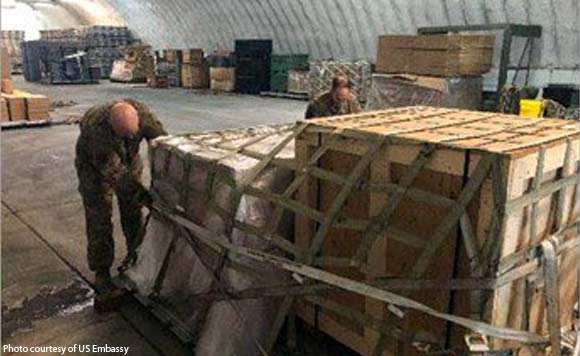 MANILA– All three Balangiga Bells are now in Japan on the eve of its official return to the Philippines on Tuesday, Dec. 11, the United States embassy in Manila said Monday.

In a photo released by the embassy, two US Air Force airmen are shown preparing the three Balangiga Bells to be transported to the Philippines at the Kadena Air Base in Okinawa.

At a press conference, US embassy press attache Molly Koscina said the war artifacts’ return is a clear demonstration of the US commitment to its alliance, partnership, and friendship with the Philippines.

“The return of the bells is the end of many years of efforts by many, many different people to ensure the bells’ return to the church where they were taken,” she said.

“It required negotiations and lots of efforts and even overcoming legal obstacles to make it happen and there are many people to thank for the return of the bells including Secretary (James) Mattis and Secretary (Delfin) Lorenzana,” she added.

More than 100 years in US custody and half a century of negotiation for its repatriation to the Philippines, the meeting between Mattis and Lorenzana in 2017 was the “breakthrough” that made the bells’ return possible, Koscina said.

“I think the breakthrough was Secretary Mattis and Secretary Lorenzana’s meeting last October,” she said.

“Later that same day, Secretary Mattis met with President (Rodrigo) Duterte and in that meeting Secretary Mattis committed to making it his personal intent to do all he could do to return the bell,” she noted.

Meanwhile, she said replicas of the two Balangiga Bells will be installed in Wyoming. The two bells at the F.E. Warren Air Force Base in Cheyenne, Wyoming formed part of a memorial for fallen US soldiers.

“We will have replicas of the original bells,” she said. (PNA)