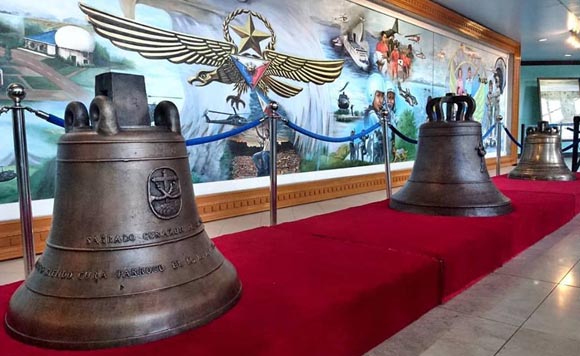 The historic Balangiga Bells arrived in Guiuan, Eastern Samar at about 10:28 a.m. Friday, an official of the Philippine Air Force said.

As of posting, the Balangiga Bells were on their way to the church in Balangiga two hours away from Guiuan.

The bells were taken from display at the PAF Aerospace Museum at about 10 p.m. Thursday and transferred to the 505th Search-and-Rescue Group Hangar in Villamor Air Base before being loaded Friday.

President Rodrigo Duterte will attend the turnover of the bells on Saturday. He earlier said that nobody from both the Philippine and United States governments should take credit for the return of the Balangiga bells, noting that they have always been the property of “the Catholic faith.”

Last December 11, the US Department of Defense turned over the bells to the Philippines, culminating in the decades-long return process involving numerous initiatives and negotiations between the two governments.

Two of these bells were housed for more than a century at the Warren Air Force Base in Cheyenne, Wyoming, while the other was placed at Camp Red Cloud in South Korea.

The bells were seized and declared as war trophies by US troops during the aftermath of the infamous Balangiga Massacre, which took place on September 28, 1901.

The Balangiga bells were at the crux of the struggle of the people of Samar, amid a dark period in Philippine-American relations during the war at the turn of the twentieth century.

Defense Secretary Delfin Lorenzana earlier said the return of the bells to the Philippines from the United States now symbolizes the two countries’ “shared histories and ideals, new beginnings, renewed friendships and a stronger brotherhood.” (PNA)