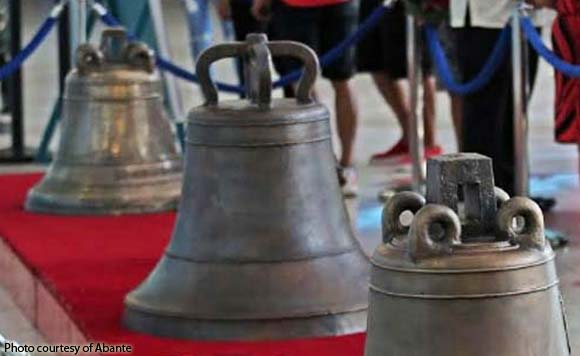 CATBALOGAN CITY, Samar – The Spark Samar campaign of the provincial government here will soon include the town of Balangiga, Eastern Samar in its tourism promotion program.

Samar Governor Sharee Ann Tan-de los Santos said in an interview Tuesday that she had discussed with the Department of Tourism on the plan to include the historic town in their tourism circuit.

The governor said the Balangiga bells’ return will surely boost tourism in Samar Island because of its national significance. People are eager to see the bells that have been out of the country for 117 years, she said.

Balangiga is 30-minute drive from Marabut, Samar where the Marabut rock formations are located. The site is one of the top destinations under the Spark Samar tourism campaign.

Tan said that aside from the Balangiga Bells, the lighting of San Juanico Bridge next year is also expected to boost tourism arrivals in Samar.

Now that the bells are back, the DOT expects more tourists to visit not just the sleepy town, but the entire Samar Island.

The DOT has started capacitating the town’s tourism stakeholders through the provision of training and PHP9.7-million funding to enhance the Balangiga Incident Marker.

The department also provided more than P600,000 for the acquisition of gears for tourists.

“Enhancing other tourist destinations in Balangiga will make visitors stay longer, giving them the opportunity to get to know our people, experience our culture, taste our cuisine and discover the infinite escapes in Eastern Visayas,” said DOT Regional Director Karina Rosa Tiopes in an earlier interview.

Balangiga town is known for the Balangiga Encounter that happened on Sept. 28, 1901, when residents, led by Valeriano Abanador, initiated an attack against US soldiers.

The villagers killed 54 American soldiers using bolos. It was the biggest defeat of the foreign troops during the Philippine-American war.

In retaliation, the US soldiers attacked the town, killing anyone who could carry firearms. The Americans then took the Balangiga bells after turning the town into a “howling wilderness”.

Two of the three bells used to be enshrined at Warren Air Force Base in Cheyenne, Wyoming while the third bell was at Camp Red Cloud in South Korea.

The bells were returned to Balangiga in an emotional handover ceremony led by President Rodrigo Duterte last Saturday, December 15. (PNA)