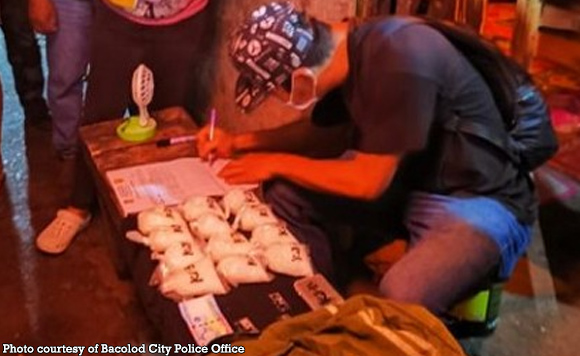 0 387
Share
Want more POLITIKO News? Get the latest newsfeed here. We publish dozens and dozens of politics-only news stories every hour. Click here to get to know more about your politiko - from trivial to crucial. it's our commitment to tell their stories. We follow your favorite POLITIKO like they are rockstars. If you are the politiko, always remember, your side is always our story. Read more. Find out more. Get the latest news here before it spreads on social media. Follow and bookmark this link. https://goo.gl/SvY8Kr

Suspect Kenneth Jacosalem, 27, a high-value target, evaded arrest during the operation around 3:30 a.m. but was apprehended more than two hours later.

In a radio interview, Maj. Ruel Culanag, chief of Police Station 3, said Jacosalem was arrested in a pursuit operation after he returned to the village, apparently not knowing that the operatives were still in the area.

Jacosalem sold P1,000 worth of shabu to an undercover policeman.

In an interview with reporters, the suspect denied possessing the seized drugs, saying someone, whom he did not identify, just left it with him.

Currently, the Bacolod police pegged the street value or “retailer price” of shabu here at P15,000 per gram.

The latest haul of Police Station 3 is the largest since the P15 million worth of shabu seized by the police from a 17-year-old male suspect end of August last year.

In 2019, the BCPO seized a total of P73-million worth of illegal drugs, including 6.083 kg. of shabu, with a street value of P72.996 million, which is the highest recovered volume of illegal drugs among the police units in Western Visayas.