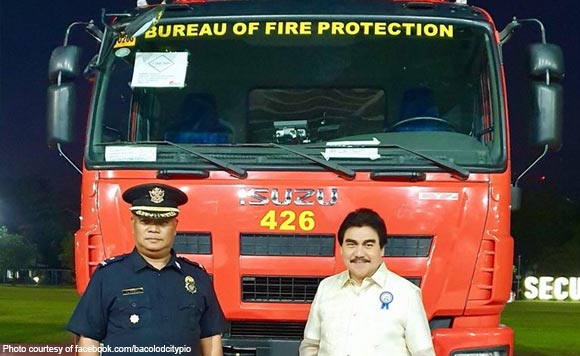 0 917
Share
Want more POLITIKO News? Get the latest newsfeed here. We publish dozens and dozens of politics-only news stories every hour. Click here to get to know more about your politiko - from trivial to crucial. it's our commitment to tell their stories. We follow your favorite POLITIKO like they are rockstars. If you are the politiko, always remember, your side is always our story. Read more. Find out more. Get the latest news here before it spreads on social media. Follow and bookmark this link. https://goo.gl/SvY8Kr

The Bureau of Fire Protection (BFP)-Bacolod recently received a brand new Isuzu firetruck worth P12.5 million from the Department of the Interior and Local Government (DILG).

“We thank President Duterte and Secretary Año for putting Bacolod in the top priority to receive the much-needed equipment that will help the firefighting capabilities of our BFP, and boost the development and progress of the city,” said Leonardia, also the national president of the League of Cities of the Philippines.

Continue Reading
BacolodBureau of Fire ProtectionDepartment of the Interior and Local GovernmentDILGnew firetruck
0 917
Share
Politiko would love to hear your views on this...
Trending News
More Stories