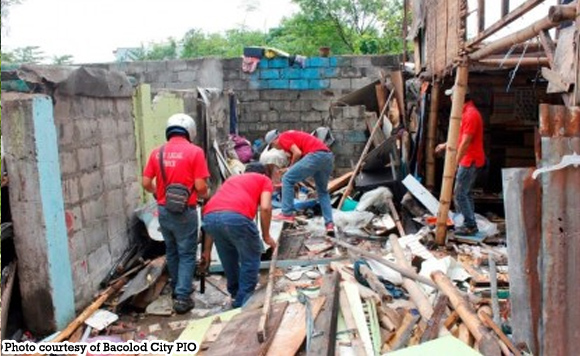 BACOLOD CITY – The city government here has reported a 90.23 percent accomplishment in the clearing of illegal structures in all its 61 barangays days, before the end of the 60-day period set by the Department of the Interior and Local Government (DILG).

The latest barangay compliance report from the City Mayor’s Office on Friday showed that a total of 11,423 illegal structures have been included in the inventory as of September 22.

Of the figure, a total of 8,578 have been voluntarily demolished by its owners while 1,729 have been demolished by the authorities. There are still 1,116 structures subject for demolition.

Executive Assistant Butch Soliguen said the remaining illegal structures have yet to be removed because of legal questions and due to humanitarian reasons.

Some illegal structures are actually entire houses and the owners are being evaluated for possible allocation of slots in the city’s relocation site, he added.

To date, a total of 17 of the 61 villages have reported 100 percent accomplishment in road clearing operations but Soliguen said their reports will still be verified by the DILG.

On September 11, Mayor Evelio Leonardia issued Memorandum Order 11 informing the barangay captains and other village officials that they have until September 27 “to deliver significant results” and ensure “the sustainability of the clearing operations”.

He added that the Office of the City Mayor continues to monitor the performance of all barangays concerned, and receive and validate the reports as mandated by the DILG.

“As such, all punong barangays and barangay officials are reminded to strictly observe the mandate in the compliance of their duty provided in the last paragraph of DILG Memorandum Circular 2019-121,” the mayor said.

In the said order dated July 29, Secretary Eduardo Año gave mayors 60 days “to exercise their powers essential to reclaim public roads which are being used for private ends, and in the process rid them of illegal structures and constructions.”

“While we observe significant progress in many parts of the country, much remains to be done,” he said.

Malaya reiterated Año’s earlier statement that there will be no extension of the 60-day deadline set under Memorandum Circular 2019-121.