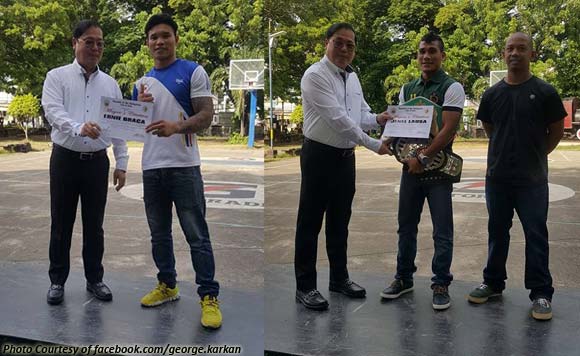 0 407
Share
Want more POLITIKO News? Get the latest newsfeed here. We publish dozens and dozens of politics-only news stories every hour. Click here to get to know more about your politiko - from trivial to crucial. it's our commitment to tell their stories. We follow your favorite POLITIKO like they are rockstars. If you are the politiko, always remember, your side is always our story. Read more. Find out more. Get the latest news here before it spreads on social media. Follow and bookmark this link. https://goo.gl/SvY8Kr

Given certificates of appreciation and recognition during the weekly flag-raising ceremony were Earnie “Cyborg” Braca and Jenel “Demolition Man” Lausa.

“I am thankful to Mayor Jed Patrick Mabilog for welcoming and giving us recognition,” said Braca.

Meanwhile, Lausa is one of only two Filipino MMA fighters in the Ultimate Fighting Championship (UFC), the premier MMA promotion in the world.

“Respect, being humble, and always look back from where you came from are my disciplines in life and that made me who I am today,” he said.

Braca hails from Barangay Ingore in La Paz district while Lausa is a native of Concepcion. #