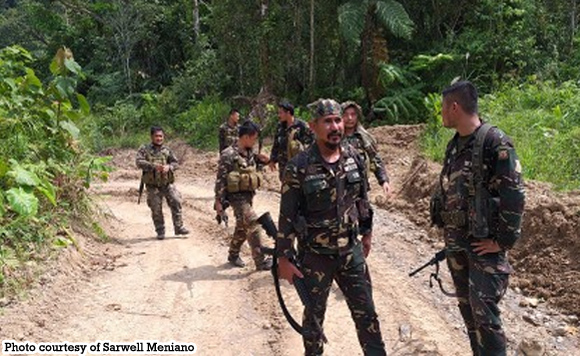 TACLOBAN CITY – The Philippine Army recovered a high-powered firearm and a home-made bomb when they overran a lair of the New People’s Army (NPA) in Mahaplag, Leyte as part of its intensified combat operation against the communist terrorist group.

The 20-minute gunbattle in Pinamonoan village in Mahaplag town resulted in the discovery of the rebel’s lair where the military seized an M16A1 rifle, 130 rounds of live ammunition, three long magazines for an M16, four short magazines for an M16 rifle, an improvised explosive device, a mobile phone, a handheld radio, a medical paraphernalia, and subversive documents with high intelligence value.

In a statement, the Philippine Army 78th Infantry Battalion attributed the successful operation to villagers who provided information to government troops.

“It is a good thing the townsfolk reported the presence of NPA in the area the people made their stand, they have enough of the terrorism made by the NPA,” Lt. Col. Roberto Obaob said.

No one from the government side was hurt during the clash while the number of casualties among rebels is still undetermined.

The government has stepped up its operation against the NPA in the southern part of Leyte province, considering that the remaining fighters have been hiding in the upland areas of the 5th district of Leyte.

The communist terrorist group moved to the borders of Leyte and Southern Leyte provinces for fear of intensified combat operations in central Leyte and northwestern side of the island.

The Philippine Army has vowed to work double-time to neutralize the remaining 15 armed NPA fighters still running and hiding in the mountains of Leyte Island.

Brig. Gen. Lope Dagoy, commander of the Philippine Army’s 802nd Infantry Brigade, earlier said their goal is to completely wipe out insurgency in Leyte before he retires in March next year.

The NPA, which has been waging a five-decade armed struggle against the government, is listed as a terrorist organization by the United States, the European Union, the United Kingdom, Australia, Canada, New Zealand, and the Philippines.