Army claims it is winning war against NPA in Leyte 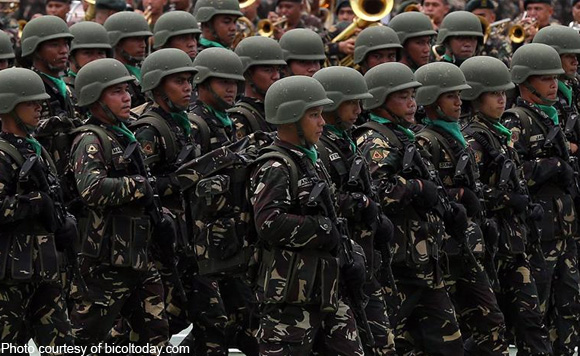 0 572
Share
Want more POLITIKO News? Get the latest newsfeed here. We publish dozens and dozens of politics-only news stories every hour. Click here to get to know more about your politiko - from trivial to crucial. it's our commitment to tell their stories. We follow your favorite POLITIKO like they are rockstars. If you are the politiko, always remember, your side is always our story. Read more. Find out more. Get the latest news here before it spreads on social media. Follow and bookmark this link. https://goo.gl/SvY8Kr

ORMOC CITY, Leyte – The New People’s Army force has weakened in the third district of Leyte after the surrender of a top leader and months of intensified military operation against the communist rebels.

The military, national government agencies, and local government officials held a service caravan on Saturday in San Isidro town attended by more than a thousand rebel returnees, who, during the occasion, pledged to return to the folds of law.

Dagoy said on Saturday they finally managed to wipe out insurgency in the villages of San Isidro, which the rebels had exerted influence over for decades. Rebel returnees, mostly farmers, will avail of the government’s Enhanced Comprehensive Local Integration Program (E-CLIP).

“The mass surrender is a manifestation that the armed bandits are already weakening, that the people have lost confidence in them. After recovering the 3rd district, our next target is the 3rd district,” Dagoy told reporters.

The surrender of NPA leader and combatant Rolando Tarong last March caused the dwindling support of the members to the terrorist group, resulting in the mass renunciation of the NPA supporters, Dagoy said.

In his surrender, Tarong turned over long and short firearms, improvised explosive devices, and several live ammunition, among others. The army also confiscated subversive documents from him.

Representatives from the national government agencies assisted former rebels during the caravan to fast track the processing of their assistance for these farmers to be able to live in the mainstream with a bearable source of living.

They are also entitled to a loan slot for business, school matriculation, PHP100,000 worth of livelihood kit, medical aid, psychological services, and legal assistance.

San Isidro Mayor Susan Ang said that in response to President Rodrigo R. Duterte’s call directing local governments to identify a specific area for agricultural development, the town distributed corn seeds, livestock and pump boats to farmers as she believes that insurgency stops if families have food in their tables.

San Isidro, a 4th class town with a population of 31,641, is subdivided into 19 villages. Other towns in the 3rd legislative district are Calubian, Tabango, Leyte, and Villaba. (PNA)