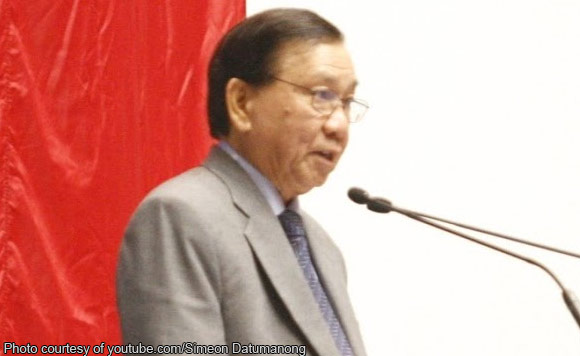 The politiko said the entire regional leadership grieved with the family of Datumanong, who he described as “an honest politician, great statesman, public servant and lawmaker.”

“The whole Autonomous Region in Muslim Mindanao has lost a great leader. Hon. Simeon Datumanong embodied the high ideals of an honest politician, a patriot who believed in the Bangsamoro cause to which he devoted his life,” Hataman said in a Philippine News Agency report March 1.

“He will forever stay in the hearts of the people of the ARMM in general and Maguindanao in particular as a deeply respected and loved leader. He will be missed not only by his constituents but also by the august halls of Congress, and the various offices he served with distinction and respect,” the politiko added.

“On a personal note, being part of the family, I extend my deepest sympathy and utmost support to all members of the clan in this mournful hour, as I wish them strength and courage on the loss of a revered patriarch,” Hataman said.

The former is one of Datumanong’s relatives in government service.

Ampatuan said the Muslim leader was confined in the Philippine Heart Center for about two weeks before he passed away due to cardiac arrest at 9:25 p.m.

“He (Rep. Datumanong) will be laid to his final resting place at Maganoy (Poblacion Sharif Aguak, Maguindanao), at about 2 p.m. (March 1),” Ampatuan said on his FB page.

Datumanong was born on June 17, 1935 in Shariff Aguak (formerly Maganoy) in Maguindanao. He is Moro politician and one of the recipients in 1974 TOYM Awardees for Public Administration.

Known among Moro people as “Bapa Sim,” he was married to Sigrid de Guzman with whom he had four children named Borgiva Tasmi, Merinisa Anisalam, Soraya Julie, and Rahma Anna Liza. He has 13 grandchildren.

He was a representative of the 2nd District of Maguindanao from 1992 to 2001. In 2001, he was appointed by then President Gloria Macapagal Arroyo as the Secretary of the Department of Public Works and Highways.

In 2003, he served as Secretary of Justice until he resigned in the same year. He was re-elected to the House of Representatives in 2007.