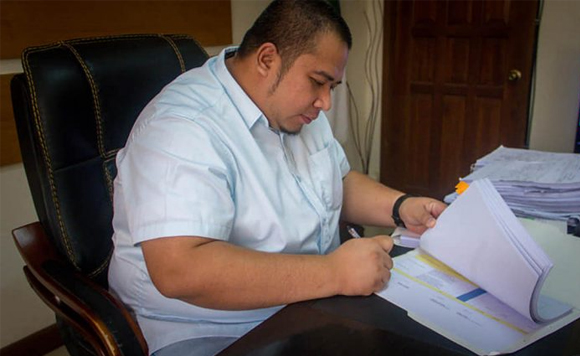 SAN JOSE DE BUENAVISTA, Antique – The municipal mayor of Sibalom has tested positive for the coronavirus disease 2019 (Covid-19) but in a stable condition.

Mayor Gian Carlo Occeña, in an official statement issued Tuesday, said he underwent a swab test last April 3 after suspecting he contracted the virus from one of the municipal officials last March 23.

“I am personally, for the sake of transparency, informing everyone that as of my RT-PCR (reverse transcription-polymerase chain reaction) test conducted on April 3, 2021 to which the official result was released on April 4, 2021, I was confirmed positive of the Covid-19 virus,” he said.

“Along with my desire for the municipality’s inclusive development and economic recovery amid the Covid-19 pandemic and for the protection and general well-being of my constituents here in Sibalom, it is a sad note that I was able to contract the virus from one of our officials who unknowingly was infected by the virus and confirmed positive last March 27, 2021,” the statement added.

Occeña said he experienced itchiness on his throat four days after he met with municipal officials last March 23 and had a low-grade fever last March 29.

“I started to develop coughing on April 3 and had a difficulty of breathing on the following day where I was advised to be admitted in a hospital facility,” he said.

He is currently admitted in a hospital in Iloilo City.

The mayor also reminded the public not to be complacent in their fight against the virus.

“At this time, we must not be complacent because we never see where the virus is,” he said in the statement.

“I am now on a stable condition with my fever already gone,” Occeña told the Philippine News Agency (PNA) in a text message.

He added that the municipal government remains open to deliver government services.

The municipal hall was temporarily closed for disinfection starting March 27 or just before the Holy Week after it was known that the municipal official whom the mayor was exposed to was Covid-19 positive.