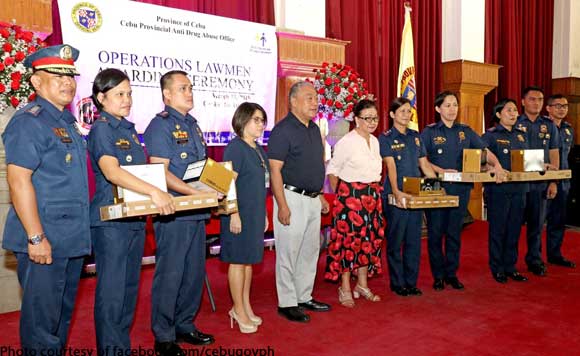 Some 135 police personnel in Cebu who took part in anti-illegal drug operations in 2018 were feted with awards and cash incentives by the provincial government.

Aside from the cash rewards, the provincial government also provided all 51 police stations with DSLR cameras and laptops to help them in documentation (https://www.cebu.gov.ph/news/capitol-rewards-cops-for-successful-anti-drug-ops/).

CPADAO Head Ivy Durano noted that with the number of drug addicts nationwide having doubled, the police are needed much more in the anti-drug campaign.

“Drug addicts in the country has not reduced but has actually swelled. It has doubled by 100%-from 3-4 million to 7-8 million,” Durano said, quoting one of President Rodrigo Duterte’s announcements.

“We need to be more innovative always in our strategies,” she said.

“Stay neutral always and just do your job. Do not pick sides, and take the side of the law always,” he said in his message.

For his part, Cebu Police Provincial Office (CPPO) Director Manuel Abrugena hopes these awards will boost the morale of the police officers.