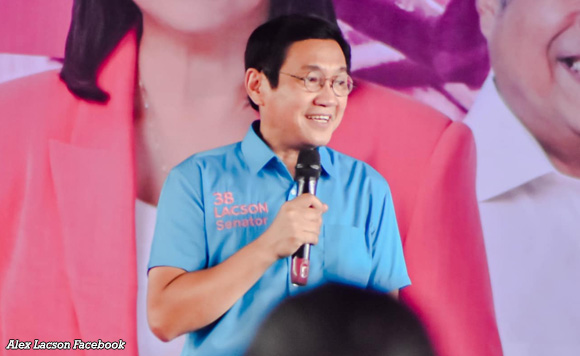 Negrense lawyer and senatorial aspirant Alex Lacson will barnstorm across Negros Island from April 3 to 7.

Lacson is running for senator under the ticket of presidential candidate Vice President Leni Robredo.

He is also expected to meet with leaders and volunteers of the Tropang Leni-Kiko from Dumaguete and other Negros Oriental municipalities, and to hold a press conference to explain his vision, platform and plans for the province.

He will visit the 6th district of Negros Occidental, especially Kabankalan, aside from the 4th and 5th districts of the province Wednesday.

On April 7, Lacson will have a speaking engagement with the Negros Press Club in Bacolod City, and meet with various sectoral groups and the leaders and members of the Leni-Kiko volunteer groups in the city.

Lacson is the lead convenor of the Pilipino Movement for Transformational Leadership, a coalition of faith-based organizations from the country’s Catholic, Protestant, and evangelical communities that aims to elect honest, competent, and dedicated public servants.