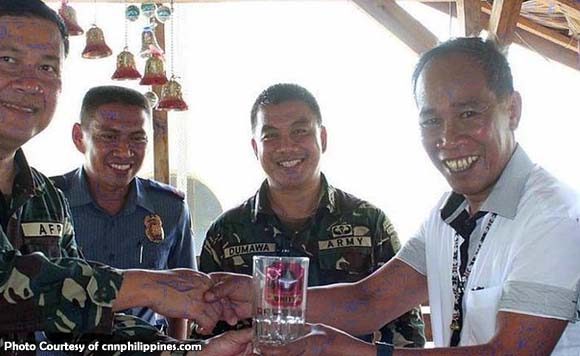 The mayor of Loreto town in Agusan Del Sur and his son were abducted by armed men posing as agents of the National Bureau of Investigation (NBI).

Reports said the gunmen stormed the house of Mayor Dario Otaza in Baan village, Butuan City at around 6:50 am of October 19, overpowering the mayor’s four security aides.

They then took the 53-year-old mayor and his 27-year-old son Daryl to a waiting black Starex van (KDG 179) and sped towards Mahay village.

A village chairman, Jeremiah Café, claimed to have witnessed the incident and confronted the armed men, numbering around 16.

He recounted the men introduced themselves as NBI agents and that they were only after Otaza.

Otaza was a former member of the New People’s Army (NPA) and has since vowed to eradicate the communists’ influence in the province.

In a statement, Undersecretary Manny Bautista of the Cabinet Cluster on Security, Justice, and Peace, said “uniformed services are now conducting pursuit and follow up operations to ensure the safe return of Mayor Otaza and his son.”

“Mayor Otaza is himself a former rebel and a member of the Manobo indigenous people’s group.

Since his surrender, he has been a partner of government in ensuring that the gains of inclusive growth reach the broadest spectrum of his constituents,” he said.

Bautista added Otaza was instrumental in the surrender of 154 NPA rebels last May.

“Abductions such as these, especially of upright, development-oriented public servants who are well-respected in their community, have no place in a civilized society.

This only goes to show the lengths to which those who wish to obstruct our efforts towards peace and development will go through, in order to fulfill their agenda.

We join the people of Loreto in condemning this incident,” the official said.