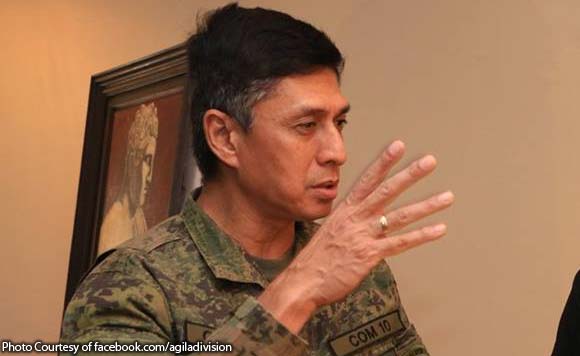 0 1,421
Share
Want more POLITIKO News? Get the latest newsfeed here. We publish dozens and dozens of politics-only news stories every hour. Click here to get to know more about your politiko - from trivial to crucial. it's our commitment to tell their stories. We follow your favorite POLITIKO like they are rockstars. If you are the politiko, always remember, your side is always our story. Read more. Find out more. Get the latest news here before it spreads on social media. Follow and bookmark this link. https://goo.gl/SvY8Kr

CEBU CITY — The Central Command (Centcom) of the Armed Forces of the Philippines on Friday warned netizens against “troll accounts” on social media purportedly owned by the Communist Party of the Philippines – New People’s Army (CPP-NPA), which are releasing fake data on casualties of government troopers.

Clement said the post was a desperate move of the enemy of the state to lure the people into joining their group, which he described in a statement as a “dwindling, money-making armed group.”

Data showed that NPA rebels in Negros suffered losses in January when government troops were able to neutralize six NPA terrorists. Of the six, four were apprehended, one arrested, and another one surrendered, he said.

Centcom noted two recorded casualties from the government’s side “when the terrorists blatantly executed one unarmed, off-duty member of the Civilian Armed Forces Geographical Unit (Cafgu) in broad daylight and indiscriminately fired at the army detachment that hurt a soldier.”

“This old trick of luring the people in providing fake data will no longer work anymore. People are now more discerning. Never again could these bands of bandits ever deceive everyone in Negros who have been witnessing our victories,” Clement said.

The commander of the armed forces in three regions of the Visayas urged the public to report the presence of communist rebels to the authorities.

“With all our successes we give credit to all the people who actively report enemy presence in their communities. This brings us to saying that the enemies must accept the fact that they are slowly losing their grip on the masses, especially to all victims of their atrocities,” he said.

The statement also said that it is the civilian populace that suffered from the hands of the rebels.

“For the record, NPA killed more civilians than it has inflicted casualties on the government side. Since 2018 to date, civilian death toll has reached 24, perpetrated by the NPA’s SPARU mercenaries,” the statement added.

In an interview with a radio broadcaster last Wednesday, a certain Ka Juaning, who claimed to be a “commander” of Negros Island’s NPA-rebel unit, spoke about alleged losses on the government side.

A well-placed source from the armed forces in the Visayas, who spoke on condition of anonymity, however, said his claims “were all unverified and farce that appear to be distorted propaganda.” (PNA)