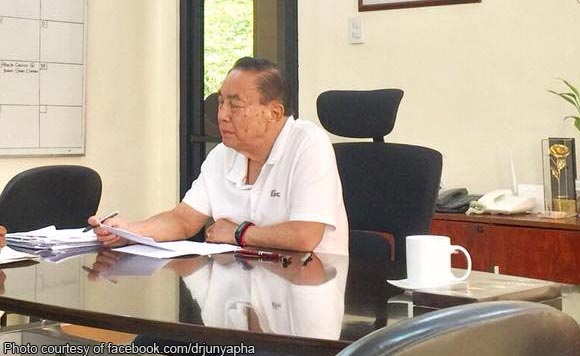 0 506
Share
Want more POLITIKO News? Get the latest newsfeed here. We publish dozens and dozens of politics-only news stories every hour. Click here to get to know more about your politiko - from trivial to crucial. it's our commitment to tell their stories. We follow your favorite POLITIKO like they are rockstars. If you are the politiko, always remember, your side is always our story. Read more. Find out more. Get the latest news here before it spreads on social media. Follow and bookmark this link. https://goo.gl/SvY8Kr

Toledo City Acting Mayor Antonio Yapha Jr is facing complaints before the Office of the Ombudsman over the allegedly illegal appointment of a city legal officer.

The Toledo City Council filed at least 10 complaints against Yapha and legal officer Teresito Largo for the latter’s appointment despite the council’s non-concurrence.

Among the charges are gross ignorance of the law, grave misconduct, grave abuse of discretion amounting to lack or excess of jurisdiction, conduct grossly prejudicial to the public service, corruption, and violations of the Local Government Code of 1991 or Republic Act 7160, 2017 Omnibus Rules on Appointments of the Civil Service Commission, Code of Conduct and Ethical Standards for Public Officials and Employees, Anti-Graft and Corrupt Practices Act, and Ombudsman Act of 1989.

The Toledo City Council thrice denied the appointment of Largo as legal officer.