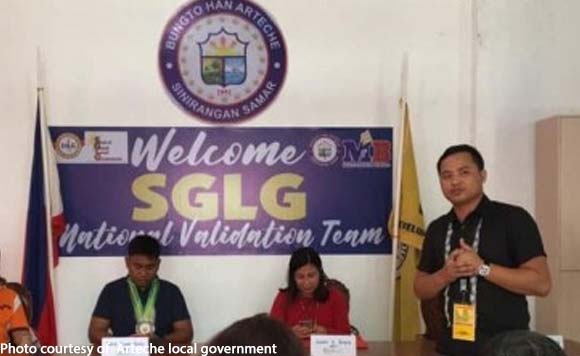 0 916
Share
Want more POLITIKO News? Get the latest newsfeed here. We publish dozens and dozens of politics-only news stories every hour. Click here to get to know more about your politiko - from trivial to crucial. it's our commitment to tell their stories. We follow your favorite POLITIKO like they are rockstars. If you are the politiko, always remember, your side is always our story. Read more. Find out more. Get the latest news here before it spreads on social media. Follow and bookmark this link. https://goo.gl/SvY8Kr

Receiving the Seal of Good Local Governance (SGLG) from the Department of the Interior and Local Government (DILG) is motivating a poverty-stricken and rural town in Eastern Samar to improve its delivery of basic services.

This is the first time the municipality of Arteche earned the recognition after several attempts since 2017, said Mayor Roland Boie Evardone. This year, the town is one of the 17 areas in Eastern Visayas considered as SGLG passers.

“We felt honor for this recognition. Even our town is considered as one of the farthest in the province, we have excelled and gained recognition. This will help us in promoting our town to let other people know that there is a town called Arteche in Eastern Samar,” Evardone told reporters on Monday.

“As a town with a poverty incidence of 56 percent and a population of over 16,000, this recognition somehow motivates us to do better,” he added.

Evardone credited the residents and local government workers for supporting their policies and programs.

Last month, town officials toured the town of Barugo, Leyte to conduct benchmarking on good practices that they can implement in their town. Barugo has been the consistent SGLG passer in the past five years. This year, the town is the only SGLG awardee in Leyte province.

Aside from Arteche, other SGLG recipients in Eastern Samar are Oras, Can-avid, Sulat, and Salcedo.

In other provinces of the region, awardees are Basey, Calbiga, Gandara and Paranas in Samar; Liloan, Macrohon, Padre Burgos, and Sogod in Southern Leyte; and Gamay, Lavezares, and San Roque in Northern Samar.

In the city level, passers are Tacloban and Baybay in Leyte, and Maasin in Southern Leyte. Samar is the lone province that made it to the list.

The SGLG is a mechanism of the DILG, which aims to gauge into institutionalizing a culture of performance among local governments. It utilizes performance information for interventions and actions. The award provides incentives to recipients through monetary grants.

The criteria for SGLG include financial and administrative management; disaster preparedness; social protection; peace and order; business-friendliness and competitiveness; environmental protection; and tourism, culture, and arts.

The DILG released the list on Oct. 26 and awarding of the seal will be held at the Manila Hotel on November 4 and 5. (PNA)

Continue Reading
Department of the Interior and Local GovernmentDILGSeal of Good Local GovernanceSGLG
0 916
Share
Politiko would love to hear your views on this...
Trending News
More Stories