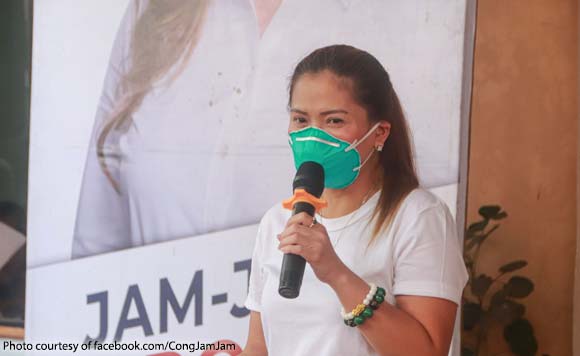 0 86
Share
Want more POLITIKO News? Get the latest newsfeed here. We publish dozens and dozens of politics-only news stories every hour. Click here to get to know more about your politiko - from trivial to crucial. it's our commitment to tell their stories. We follow your favorite POLITIKO like they are rockstars. If you are the politiko, always remember, your side is always our story. Read more. Find out more. Get the latest news here before it spreads on social media. Follow and bookmark this link. https://goo.gl/SvY8Kr

Iloilo City Rep. Julienne Baronda added six more bills to her list of legislative measures that have either hurdled the House of Representatives or were signed into law.

Baronda’s bills approved on third and final reading this week before Congress adjourned Wednesday are as follows:

-House Bill No. (HBN) 1557 substituted with House Bill 10699, An Act Providing for the Magna Carta of Barangay Health Workers

-HBN 4373 substituted with HBN 10647, An Act Granting Additional Benefits to Filipino Centenarians, recognizing Octogenarians and Nonagenarians, and Appropriating Funds therefor, amending for the Purpose Republic Act No. (RA) 10868, otherwise known as the “Centenarians Act of 2016”

-HBN 10625, An Act Creating the Department of Economic and Development Planning, Defining its Functions, and Appropriating Funds therefor

-HBN 10657, An Act Promoting Philippine Indigenous and Traditional Writing Systems and Providing for their Protection, Preservation and Conservation

-HBN 10697, An Act Establishing the National Center for Geriatric Health and Research Institute, defining its Powers and Functions, Creating Regional Geriatric Specialty Centers in the Department of Health-retained Hospitals, and Appropriating Funds therefor

-HBN 10698, An Act Strengthening the Sangguniang Kabataan by Institutionalizing Additional Reforms to Revitalize Youth Participation in Local Governance and by Providing Honorarium, other Benefits, and Privileges, Amending for the Purpose Certain Sections of RA 10742 Otherwise Knowns as the “Sangguniang Kabataan Reform Act of 2015”

Baronda said she was glad that Republic Act 11496, a law increasing the authorized bed capacity of the Western Visayas Medical Center (WVMC) from 425 beds to 700 beds, which she authored, is being implemented by the national government.

Since she assumed office, the lady solon, who also serves as Assistant Majority Floor Leader and vice chairperson of the transportation panel, has authored or co-authored a total of 159 bills.