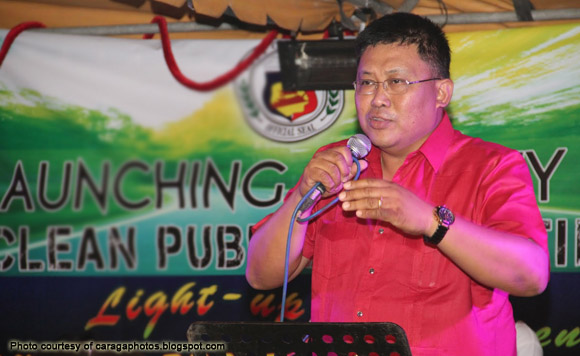 0 487
Share
Want more POLITIKO News? Get the latest newsfeed here. We publish dozens and dozens of politics-only news stories every hour. Click here to get to know more about your politiko - from trivial to crucial. it's our commitment to tell their stories. We follow your favorite POLITIKO like they are rockstars. If you are the politiko, always remember, your side is always our story. Read more. Find out more. Get the latest news here before it spreads on social media. Follow and bookmark this link. https://goo.gl/SvY8Kr

Here’s a great example of political unity and initiative, the kind that should leave corrupt politikos in a cold sweat.

Some 48 Barangay chairmen in Butuan City, Agusan del Norte recently took matters in their own hands by filing graft and plunder charges before the Office of the Ombudsman against their mayor, Ferdinand Amante.

The charges, which also indicts contractor Jesusito “Boyet” Legaspi, have to do with the anomalous P253-million contract for the construction of the Butuan City Polysport Complex.

The Barangay leaders took blatant details of a Commission on Audit (COA) report as evidence. According to COA, Amante and the bids and awards committee erred in disregarding the contractor’s failure to submit its list of personnel and their qualifications as part of the bid document.

“The COA said the mayor showed patent bias in favor of contractor JD Legaspi when he disregarded the latter’s failure to produce accreditation papers from the DPWH, the DOLE Accredited Certificate of Inspection and the TESDA Certificate of Operators,” Philippine Star columnist Alex Magno wrote about the Ombudsman case.

“This is a textbook case of graft: an ineligible contractor wins a government contract at a cost way above estimate,” summed up Magno.

But perhaps the biggest insult for the Barangay chairman was the sight of the unfinished sports complex itself. Slated for completion way back in September 2013 (construction began February of that year), the project may yet become Mayor Amante’s ignominious legacy. (Randy K. Ortega)