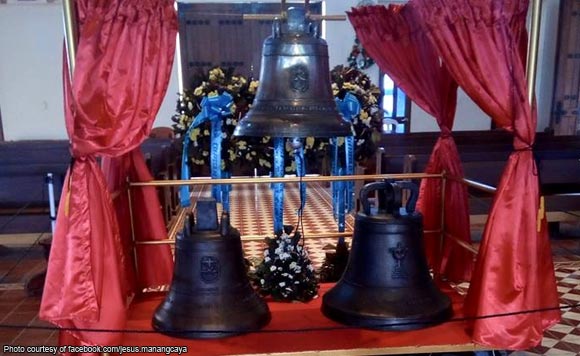 MANILA — The Department of Tourism (DOT) on Saturday said the return of the Balangiga Bells to Eastern Samar, 117 years after it was taken to the United States, will fuel curiosity among local and foreign tourists alike in the history of the region.

“We, at DOT, are so happy for the people of Eastern Samar as the homecoming of Balangiga Church bells may yet turn not only Balangiga town but the whole of Eastern Visayas (Region 8) into an emerging tourist destination,” Tourism chief Bernadette Romulo-Puyat said in a statement.

“In time for the Christmas season, this is one of the best gifts the region could ask for,” she added.

The DOT expects an influx of tourists desiring to see the three Balangiga Bells along with the old church in Eastern Samar, where they will be stored.

These bells are seen to boost tourism activities not only in the town but the whole Eastern Samar.

“Eastern Visayas is really rich in history and among those historical places that can help in improving our tourism is the town of Balangiga which has figured prominently in both the Philippine and American history,” Puyat added.

“Foremost of these is the improvement of the Balangiga Incident Marker, funded under DOT-Yolanda Comprehensive Rehabilitation and Recovery Project worth PHP9.7 million, which was downloaded to the LGU,” disclosed Tiopes.

The improvement includes landscaping and beautification of the park and the small museum located at the back of the marker to make it more presentable to tourists and pilgrims who will be visiting the town.

The Balangiga Incident Marker is the work of National Artist Napoleon Abueva, inaugurated on the 102nd commemoration on September 28, 2003.

“Enhancing other tourist destinations in Balangiga will make visitors stay longer, giving them the oppportunity to get to know our people, experience our culture, taste our cuisine and discover the Infinite Escapes in Eastern Visayas” Tiopes said.

The agency is currently looking at accrediting homestay units to address the lack of accommodation for visitors in town.

Homestay is a tourism program that allows visitors to rent a room from a local family who earns additional income and at the same time enables tourists to immerse with the locals and learn Filipino culture.

The three church bells were seized by US troops in an attack in the town of Balangiga in 1901. Appeals for the bells’ release have been made a more than half a century ago, which has recently gained impetus when President Duterte in 2017 rallied the nation to demand the war trophy’s repatriation.

The three bells were sent back to Manila on December 11. (PNA)