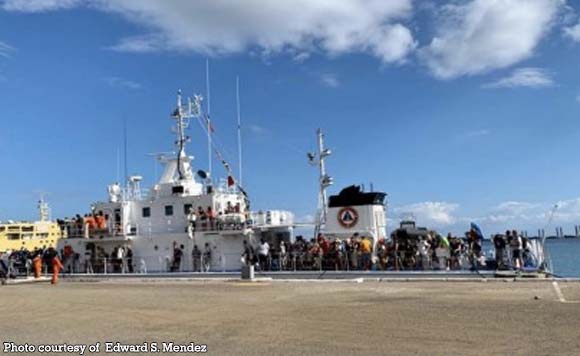 0 1,536
Share
Want more POLITIKO News? Get the latest newsfeed here. We publish dozens and dozens of politics-only news stories every hour. Click here to get to know more about your politiko - from trivial to crucial. it's our commitment to tell their stories. We follow your favorite POLITIKO like they are rockstars. If you are the politiko, always remember, your side is always our story. Read more. Find out more. Get the latest news here before it spreads on social media. Follow and bookmark this link. https://goo.gl/SvY8Kr

LAPU-LAPU CITY – The Tourism, Cultural and Historical Affairs Commission (TCHAC) here has rescued at least 135 foreign tourists stranded in Bohol, Siquijor, and Negros Oriental due to the cancelation of outbound flights in light of the community quarantine status in three of the four provinces of Central Visayas.

Edward Sotto Mendez, city tourism officer, said on Wednesday that the tourism officers from the three neighboring provinces had sought the help of his office after tourists were not able to secure a flight as a result of air and land travel suspension following the placement of Cebu under general community quarantine.

Of the four provinces in Central Visayas, only Siquijor has not declared a state of community quarantine.

According to Mendez, Department of Tourism (DOT) 7 (Central Visayas) Director Shalimar Tamano requested the Philippine Coast Guard (PCG) to deploy their boat to Bohol, Siquijor and Negros Oriental to fetch the tourists of different nationalities.

“Yesterday (Tuesday), we finished rescuing them all. They arrived in Cebu on board Philippine Coast Guard boats,” Mendez told the Philippine News Agency (PNA) in an interview.

He said Tamano also asked the Department of National Defense (DND) to provide the tourists with air transportation using the Philippine Air Force’s (PAF) C-130 for Manila so that they can catch flights going out of the Philippines.

Mendez, however, said he could not assure that all of the 135 stranded tourists could get a slot for the next C-130 flight, as the embassies of Canada, France, Germany, and Russia have requested the Department of Foreign (DFA) to prioritize their nationals.

These 135 foreigners are on top of the more than 1,000 passengers, mostly overseas Filipino workers (OFW), stranded at the Mactan-Cebu International Airport (MCIA) who are awaiting flights to differentdestinations abroad.

Mendez said personnel of the Tourism Office assisted tourists in booking and rebooking their outbound flights.

“Some of them were able to rebook their flights. But some could not rebook their tickets because of (the) high rebooking fee imposed by the airline companies. They were asked to pay PHP15,000 to PHP20,000 rebooking fee, depending on the country of destination,” he said in Cebuano.

Mendez said the city’s tourism stakeholders would appeal to airline companies to waive or give discounts on fees for rebooking of flights for the stranded tourists, especially those who can prove that they do not have any more money for their extended stay in the region due to the coronavirus disease 2019 (Covid-19) situation.

In the meantime, the TCHAC, headed by Cynthia King Chan, wife of Mayor Junard Chan, allowed the stranded tourists to stay on the third floor of the Tourism Office here while three hotels volunteered to provide a kitchen soup or packed lunch.

Mendez commended the management of Savoy Hotel in Mactan Island for giving discounted rates to the stranded passengers.