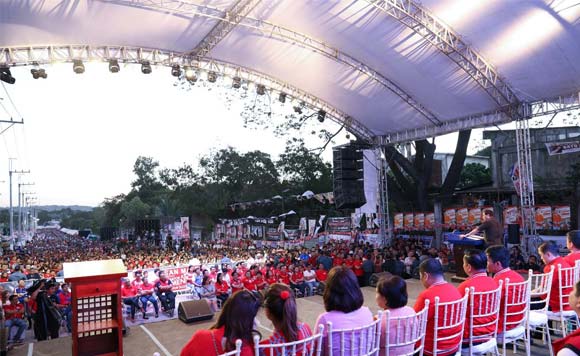 0 1,228
Share
Want more POLITIKO News? Get the latest newsfeed here. We publish dozens and dozens of politics-only news stories every hour. Click here to get to know more about your politiko - from trivial to crucial. it's our commitment to tell their stories. We follow your favorite POLITIKO like they are rockstars. If you are the politiko, always remember, your side is always our story. Read more. Find out more. Get the latest news here before it spreads on social media. Follow and bookmark this link. https://goo.gl/SvY8Kr

An estimated 120,000 Cebuanos are expected to attend the administration’s campaign rally to be held at Plaza Independencia on Sunday.

Drones, bottled water, backbacks, and ballpens will be prohibited at the event, according to the Office of the Presidential Assistant for the Visayas (OPAV).

“The PDP-Laban is preparing for a 120,000 crowd but we have contingencies up to 150,000 because it will be attended by official candidates of PDP-Laban, the guest candidates from all over the Province including the cities, Cebu, Mandaue, and Lapu-Lapu,” Borromeo said in The Freeman report.

Duterte to join Senate bets in Cebu on Sunday

He added that the party’s Senate aspirants will deliver their speeches starting at 2 p.m. until the President arrives.