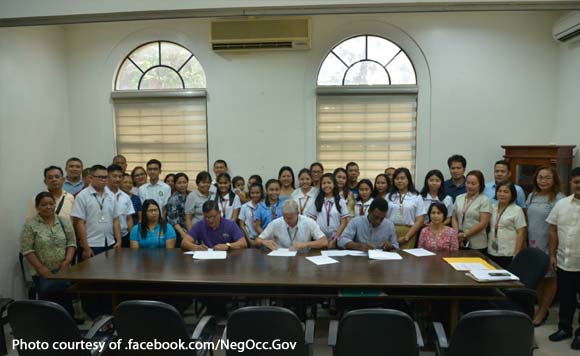 0 726
Share
Want more POLITIKO News? Get the latest newsfeed here. We publish dozens and dozens of politics-only news stories every hour. Click here to get to know more about your politiko - from trivial to crucial. it's our commitment to tell their stories. We follow your favorite POLITIKO like they are rockstars. If you are the politiko, always remember, your side is always our story. Read more. Find out more. Get the latest news here before it spreads on social media. Follow and bookmark this link. https://goo.gl/SvY8Kr

Board Member Agustin Ernesto Bascon, chairman of the Committee on Education; Karen Dinsay, head of the Negros Occ. Scholarship Program; and the parents and teachers of the students also joined the MOA signing.

They underwent examinations and interviews before qualifying for the scholarship.

The scholars, who will study General Health and Automotive Courses for three years, are set to leave for Japan in March.

Under the MOA, the provincial government will pay the scholars’ monthly allowance, insurance, health and dental fees, enrolment and school fees, clothing and textbooks, educational camp, transportation tickets, bicycles, passport, visa, and other allowances while the school will provide the full tuition fee and full accommodation of the scholars for three years.