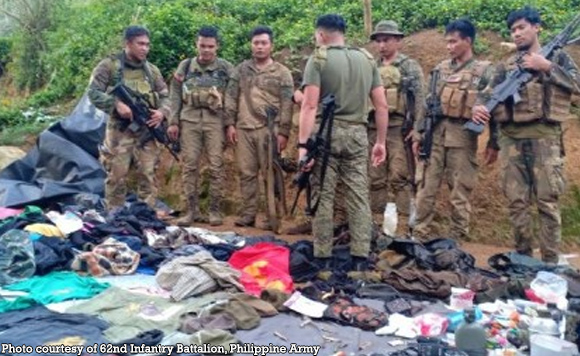 0 1,364
Share
Want more POLITIKO News? Get the latest newsfeed here. We publish dozens and dozens of politics-only news stories every hour. Click here to get to know more about your politiko - from trivial to crucial. it's our commitment to tell their stories. We follow your favorite POLITIKO like they are rockstars. If you are the politiko, always remember, your side is always our story. Read more. Find out more. Get the latest news here before it spreads on social media. Follow and bookmark this link. https://goo.gl/SvY8Kr

A report from the operating unit, the 62nd Infantry Battalion (62IB), initially named the fatality as “Alyas Dodong” or “Alyas Beboy”, who was assigned to do intelligence work with the NPA hit squad Special Partisan Unit (SPARU). The wounded was identified as Ernesto Amallo.

Lt. Col. Egberto Dacoscos, commanding officer of 62IB, said the encounter took place when the troops responded to information about the rebels’ presence in the area in the past days.

On Wednesday, the rebels threatened the family of village chief Charlie Zambrona in neighboring Barangay Tingongan.

On Saturday afternoon, the 62IB released the photo of the killed NPA fighter, found holding a caliber .45 pistol.

The Army unit also provided photos of the wounded and the five others who were arrested.

Soldiers found personal items, such as clothes, slippers, rubber boots, hand-held radios, electrical wires, as well as cooking utensils and foodstuffs in the area, which served as the rebels’ hideout.